Oh that? Not anymore.

Courtney, a single momma of a beautiful twelve-year-old son, had never been apart from her boy for more than a single day, except for the unreliable weekends with his father.

Twelve years. No adult vacations. No solo time to recharge. No plane trips out of town.

No retreats with girlfriends. Nothing.

Even just thinking about “leaving” sent her into spirals of anxiety, even though she had a reliable sitter lined up.

She just couldn’t make it happen. She’d make plans and then cancel them. Invent some sorta-rational reason why she just shouldn’t go. Even though she wanted to.

Not anymore.
A few weeks ago, I watched Courtney walk into a corral and stroke a horse on its soft, velvety nose. She established boundaries with the horse with ease. Guided the horse around the paddock with the ease of an expert. Something she had always dreamed of doing. (She adores horses). She was a total natural. We called her “the horse whisperer.” I watched her connect, deeply, with this exquisite animal. She began to cry (literal) tears of joy. 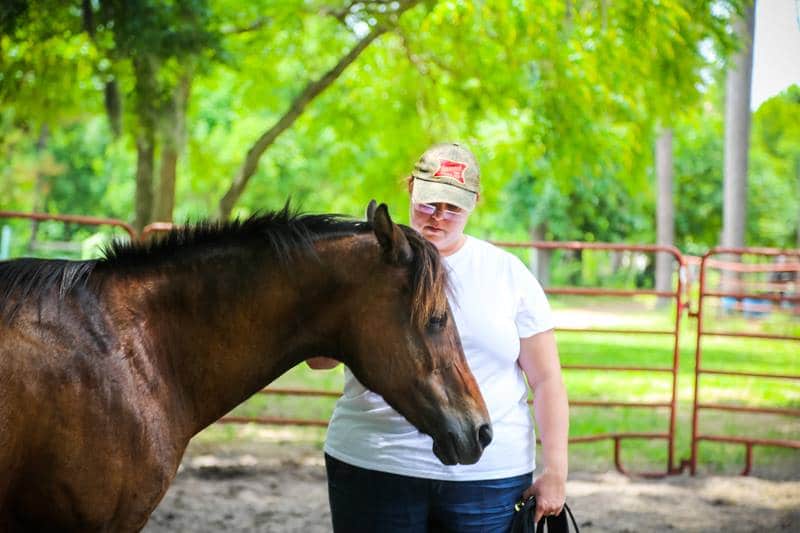 She was in the middle of a four-day retreat, away from home, surrounded by fabulous women, having the time of her life.

Was she terrified? Absolutely.

Exhilarated and deliciously happy? That, too.

Was her son completely fine back at home, thanks to her thoughtful care and planning?

In that moment — with the horses — Courtney had what we in the personal development biz call “a breakthrough.”

All those years where she refused to leave home? Denying herself the pleasures of travel, adventure, sisterhood? Everything she used to load onto her shoulders, holding her back from the life that she wants and deserves?

Courtney wasn’t the only woman to have a “not anymore” breakthrough-moment on this particular retreat, though.

Wendy posted a selfie on Facebook after decades of hiding from the camera. (Body-shame? Covering up? Ducking out of group photos? Not anymore).

Terri “outed” herself as a healer. (Worrying about what other people might think about her non-traditional skills? Not anymore.)

Heidi landed her first consulting client after making the scary, bold choice to launch her own business. (Biding her time in a “safe” but soul-sucking job? Not anymore.)

Let me ask you the BIG question:

What needs to become a “not anymore” in your own life?

What is weighing you down? Constricting your day? Dimming your light?

What’s getting neglected because you’re just too darn scared to take action?

It can become a “not anymore.”

The women I just mentioned? They are living proof that it’s possible.

It’s possible for you, too.

Your breakthrough will happen when you make a choice.

The hardest (and best) choice you’ll ever make.

The choice to stand up for what you want — to make a scene, not just passively hope that things will change — and act in spite of your fear.

Every single one of the women I just mentioned — Courtney, Wendy, Terri, Heidi — every one of them were absolutely TERRIFIED at the exact moment that they had to walk into the corral, post that selfie, speak up and tell the truth, or send off the proposal.

They felt the fear.

They knew what needed to be done.

They chose to take action, anyway.

And THAT is why now, they get to revel in the deliciousness of being able to say,

All that mind-trash I used to feed myself?

All the excuses and rationales I invented to stop myself from creating the life that I want?

All the heaviness and inertia I used to feel in the face of my goals and dreams?

Yeah. I still feel the fear sometimes. The difference, now, is that I won’t let it stop me.

By anybody else. Certainly not by my own mind.

PS. Imagine that it’s six months into the future.

What would you LOVE to be able to say “not anymore” about?

Late-night stress eating while the kids are asleep? Hemming and hawing about launching that side business? Procrastinating instead of contacting that financial planner you promised yourself you’d email to help resolve your debt?

Fill in the blank:

Imagine how GOOD it would feel to create that kind of breakthrough for yourself.

You can get it. I’m here to help…This is your next move.

Annnnnd then my jaw hit the floor.